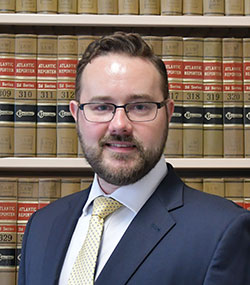 Prior to joining the Circuit, Michael worked as an associate for a private law firm, where his practice focused on civil litigation. He also served as an injunction for protection attorney at SafeSpace, where he represented victims of domestic violence in the Nineteenth Judicial Circuit of Florida. Michael is married to another local attorney, Genevieve Bonan, and they have two young children named Marc and Josephine.